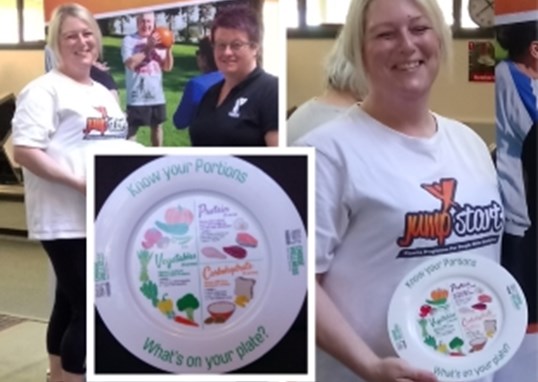 Jumpstart gives busy Mum a new healthy outlook. Busy mother and Upper Hutt resident Karen Turner has managed to put her health back on track thanks to the diabetes health programme Jumpstart, after a big scare that could have led to major organ failure.

As a full-time commercial cleaner, while also managing family and home, Karen blamed her tiredness on being run-down and busy, but now realises she didn’t actually understand how serious her situation had become.

“It was around Mother’s Day this year when I started to feel really exhausted,” Karen says, “I was getting pins and needles in my fingers and toes, and my vision had become blurry.  I was also thirsty all the time, but I thought I was just working hard, so I tried to stay busy.”

Diabetes1 wasn’t the first thing on Karen’s mind but she booked a Doctor’s appointment and was told her blood sugars were very high and well above normal levels.   She was referred to the hospital, and there she was told her HbA1C level was double the level at which Type 2 Diabetes1 is the diagnosis.

“I was now an emergency with the doctors mentioning the potential for liver and kidney failure.  I was put on Metformin to try and control my blood sugars and then the diabetes nurse mentioned Jumpstart saying it was the best programme for me to help me get my health back on track.

“I signed up the next day,” says Karen.  “I was very concerned, the Doctor said I shouldn’t drive and I was worried I might have to stop work – I thought, I’m in a mess!”

Karen then gave herself ten weeks, the length of the Jumpstart programme, to make a difference for her and her family.

When asking Karen whether she’d ever considered going to the gym before she said “hell no, but now I get anxious if I haven’t done my exercise.  The YMCA is not your typical gym – there are Mums and Dads, children and grandparents, no one is judging you and you can wander, or wobble, around and feel comfortable,” she says.

Karen says she’s a self-confessed foodie and has been overweight for a long time.  She hasn’t got a filter when it comes to food and admits it’s easy to just keep on eating.  So when Jumpstart presented her with a meal plate, a dish divided into sections for different food groups, she realised there was a solution to judging portion size more effectively.

“I live off that plate now,” she says, “it sounds rigid but I now couldn’t live without that plate.  For someone like me who doesn’t appreciate meal sizes it’s just such a simple but good idea.”

Karen has achieved a remarkable turnaround.  Her sugars are now at normal level of between 5-6 mmol/L, her HbA1C is 39 mmol/L, she’s slowly being weaned off Metformin, she’s lost 7 kilos, has no eyesight problems, is buying normal sized clothes and feels great.